Libraries have been part of the fabric of  society since at  least  the 7th Century BC . The first library is thought to have been  Library of Ashurbanipal.The site is in modern day Iraq.

Libraries developed over the centuries. Public Libraries actually began in the UK. The earliest example in England of a library to be endowed for the benefit of users who were not members of an institution such as a cathedral or college was the Francis Trigge Chained Library in Grantham, Lincolnshire, established in 1598. The library still exists and can justifiably claim to be the forerunner of later public library systems.

In 1847 Parliament appointed a committee, led by William Ewart, on Public Libraries to consider the necessity of establishing libraries through the nation: In 1849 their report noted the poor condition of library service, it recommended the establishment of free public libraries all over the country, and it led to the Public Libraries Act in 1850, which allowed all cities with populations exceeding 10,000 to levy taxes for the support of public libraries. Another important act was the 1870 Public School Law, which increased literacy, thereby the demand for libraries, so by 1877, more than 75 cities had established free libraries, and by 1900 the number had reached 300. This finally marks the start of the public library as we know it. And these acts influenced similar laws in other countries, most notably the U.S.

Yet today in 2013  Public Libraries are under threat. Lincolnshire was the birth place of the public library and the irony is that the biggest cuts to the library service are happening in Lincolnshire. Is this the legacy that we want for the next generation.

A legacy where libraries where once the heart of a community, now having that heart ripped out. What affect will this have on communities where deprivation is high, child poverty is high. Libraries are a vital resource in these communities.

Libraries are more than books, they represent community hubs. They are places for social interaction among all age groups, crossing the generations. They are free access for information for all. Equality is a library. A safe environment with experienced, professional  qualified Librarians. These are aspects of our society that should be cherished, protected and invested in.

There are many countries in the world today who are investing in their public libraries. They are being creative and innovative. This is the way forward. This is progression.

As Toni Morrison has said : 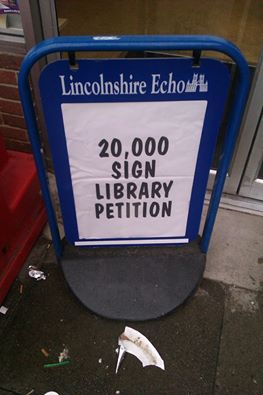 “Access to knowledge is the superb, the supreme act of truly great civilizations. Of all the institutions that purport to do this, free libraries stand virtually alone in accomplishing this mission. No committee decides who may enter, no crisis of body or spirit must accompany the entrant. No tuition is charged, no oath sworn, no visa demanded. Of the monuments humans build for themselves, very few say touch me, use me, my hush is not indifference, my space is not barrier. If I inspire awe, it is because I am in awe of you and the possibilities that dwell in you.”

I believe in the importance of a public owned library. In which professional, qualified librarians are part of this vital resource. Volunteers are a good support, but they cannot replace the professional with the expertise, the experience. In order to provide an efficient and comprehensive Library service for the people, this is what I believe is the right formula. Libraries should be invested in, protected. They are shining beacons in communities.

If you would like to be part of the campaign to Save Lincolnshire Libraries please go to http://savelincslibraries.org.uk and sign our petition. We can also be found on Facebook – https://www.facebook.com/groups/savelincslibraries/ and on Twitter at @savelincslibs

There are many excellent quotes about Libraries and here are some that I particularly like :

A library outranks any other one thing a community can do to benefit its people. It is a never failing spring in the desert.

Some of the sources from Wikipedia.