In 2009 the leader of the opposition, David Cameron said this when asked what taxes he would raise :

“You could try, as you say, to put it on VAT, sales tax, but again if you look at the effect of sales tax, it’s very regressive, it hits the poorest the hardest. It does, I absolutely promise you. Any sales tax, anything that goes on purchases that you make in shops tends to . . . if you look at it, where VAT goes now it doesn’t go on food obviously but it goes very, very widely and VAT is a more regressive tax than income tax or council tax.” 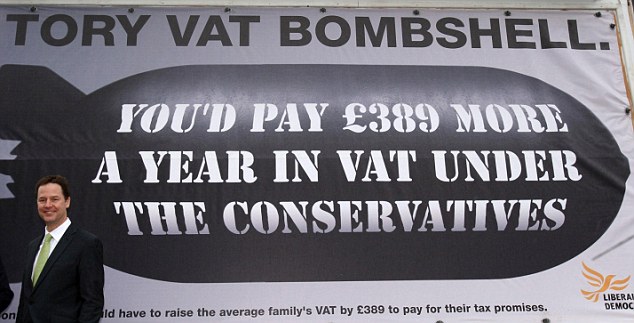 VAT very rarely gets mentioned anymore by the Govt.

VAT is a regressive tax despite what George Osborne professed back in 2011. This tax hits the poorest hardest. People on low incomes do not have the savings,their money is spent on essentials. VAT increases the burden.

This increase in the cost of living has a dramatic affect on people on the lowest incomes. Which may result in people accessing money via high interest loans which creates even more personal debt and hardship. There has been an huge increase in the growth of food banks. And yet the obvious connection to an increase in VAT is there.

Is this fair ?  Direct taxation has always been far more progressive.  Yet the coalition Govt decided to cut the direct taxes for those who are  wealthy  in society. All in this together is a hollow phrase. The rich have become richer, the burden has been placed on people who can least afford the VAT increase.