At 11.30 am today, Wednesday 8th March 2017, a Quilt will be displayed within Westminster Hall. This Quilt has the names of 598 women sewn to individual patches, by both women and men from not only across the UK buy around the globe. The names of each and every single woman lovingly sewn into this Quilt are the names of mothers, daughters, sisters, aunties, friends who are no longer with us. The names of women in England and Wales murdered by a partner or ex between the years of 2009 and 2015. So today on International Women’s Day the Quilt will after weeks of hard work be unveiled in the very heart of our country’s democracy. Having played a small role in the project by making 4 patches for 4 women, today I would like to share the story of the Women’s Quilt and the extremely important reason for its creation.

The idea for the project came from Labour Councillor Roxanne Ellis, following the release of the Femicide Census, a database containing information on women killed by men in England and Wales since 2009. It was developed by Karen Ingala Smith and Women’s Aid working in partnership, with support from Freshfields Bruckhaus Deringer LLP and Deloitte LLP. The census aims to provide analysis that can provide a clearer picture of men’s fatal violence towards women. The information pulled together into a report published in December 2016. The Census does not make easy reading. Approximately two women a week are murdered at the hands of their partner or ex. These aren’t isolated incidents but a very real and very heartbreaking problem.

So why the Quilt? Because these women should mean so much more than just another statistic, a number that’s so easy to ignore and forget about. As Roxanne told me: “Something that emphasised the names of the women, as so often it’s their names are forgotten, like with Reeva Steenkamp. When these things get to court the emphasis is on the man, not the woman. For instance one of the men had his sentence reduced because “she nagged” This point is such a strong one. Because so many of the “patchers” who shared there work spoke of their frustration that when their researched info the woman they would be sewing for, there is so little information reported. The focus is all on the perpetrators and the crime it’s self. The media take very little interest in the woman herself and it adds to the problem. A victim being another statistic that’s easy to forget about.

When sewing my patches I found the women I was representing to have lives I would of love to of known more about. From a woman who had travelled the world to a yoga teacher. They weren’t just another number on the list they were very real, very incredible people in their own different ways. One of my patches was For Tracy Maria Walters. I got quite upset reading her story. She died in such a terrible way when her husband deliberately crashed their car on the M1. Tracy was an accomplished & respected horse rider. She was a member of Endurance GB & had ambitions of furthering her competitive riding career. Horse shaped helium balloons were released into the sky following her funeral so I added the horse shoe to her patch as horses were such a huge happiness in her life. She deserved to be so much more than just a statistic.

The patches made are to reflect that. A huge colourful Quilt for the victims is a lot harder to ignore than a printed list on paper.

The “sisterhood” that has grown with the Quilt is just a further reflection of the power that happens when women (and the many men involved too!) come together for a powerful cause. When I joined the Facebook group that coordinates the project had just over 300 members and to date it now has well over a thousand. There were still hundreds of names left to sew when I became a member and within just weeks every single name had some one sewing for them. Patches have been sent from as far away as New Zealand. The social media support has been incredible. As a mark of respect for the families of the victims no one from the group contacts them, but many have seen the project and reached out. If requested the patch of their love one has been found and shared. A bittersweet moment.

One of the incredible things that strikes me about this group. The love & warmth I feel from it. The admin team along with Roxanne do a fantastic job in running the project. You see a real care from the people who are members and a constant reminder of the groups purpose and a drive to succeed. There is no more an Important day than today to discuss that feeling of the “sisterhood” I’ve never felt it stronger than within The Woman’s quilt group. I’ve enjoyed watching people post pictures of the progress of their patch, passionately share the story of the women they have choosen to represent, explain their own experiences and post pictures of the completed patch and just like the women who’s voices their stand for, each patch is beautifully unique.

So what’s next? Well after today the plan is for the Quilt to be shared with as many people as possible. Following the launch at Westminster the Quilt will go on tour. Many places have offered to display the quilt already and further requests are welcomed. You can support the logistics by donating to the quilts fund raising page:
https://www.gofundme.com/the-womens-quilt

The Quilt may be completed but the work still goes on. Hopefully this is the mood for change. Where the victims voice becomes the focus of the attention and no one ends up just being another number. 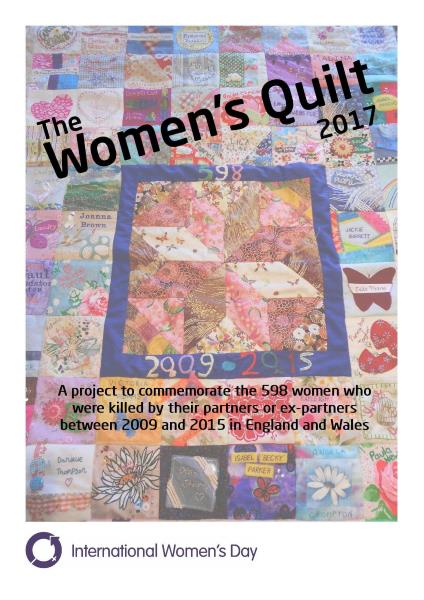